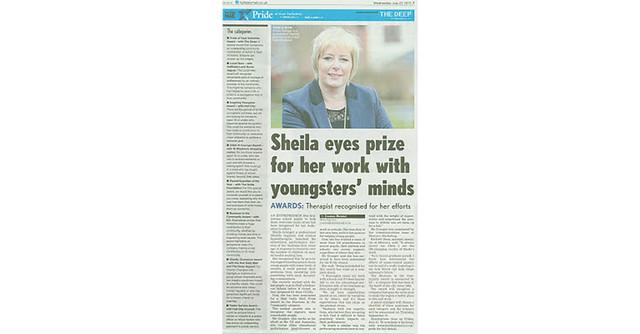 A Selfless East Yorkshire-based clinical hypnotherapist has been nominated for the Mail's Pride of East Yorkshire Awards for her work helping students adopt a positive mindset and deal with exam-related anxiety.

Sheila Granger, a professional lifestyle engineer and clinical hypnotherapist who works as far a field as Australia and the USA, launched the Educational Performance division of her business four years ago in response to growing concerns over the number of children on mental health service waiting lists. She recognised that by providing support mechanisms to those young people with lower levels of anxiety, it would prevent their problems from escalating into something with much more devastating consequences. Now, she has trained a team of more than one hundred Educational Performance Practitioners worldwide to ensure young people, their parents and their schools can access support of this nature no matter where they are!

Sheila has been nominated for the Mail’s Business in the Community award by her communications partner Mercury. “Being nominated for this award has come as a complete shock,” said Sheila, “I thoroughly enjoy my work with schools and it’s been incredible to see the Educational Performance side of my business go from strength to strength due to increased demand over recent years." She added, "We all have expectations placed on us, either by ourselves or by others, and it’s these expectations that can cause us the greatest stress. Students with low expectations who believe they are going to fail, find it difficult to think positively – which ultimately impacts on their performance. In much a similar way, top performing students have to contend with the weight of increased expectations and sometimes the pressure to deliver can set them up for a fall. For teachers, there is already a vast emphasis on the delivery of pastoral care and teachers have the added role of coaching individuals through the exam experience, as well as preparing them academically.”

There’s no place quite like home for Sheila. She says it’s been an honour to work with students and teachers on her doorstep, in her hometown of Hull, to make a difference to their lives. She has been working closely with students at Endeavour High School in recent months, which is closing at the end of this school year, to make sure pupils go out on a high! Teachers at the school say the initiative has paid real dividends with students who are now better prepared than ever before. Headteacher Stewart Edgell said: “If you have a student who is worried and you bring someone in who can help them by arming them with new strategies and coping mechanisms, they feel valued that someone has taken note of their concerns and is doing something with them. Sheila’s work has dovetailed nicely into giving students a positive outlook and creative ways of preparing for exams, such as setting aside one hour a day when they can worry but during the rest of the day putting any negative thoughts out of their minds for example." He later expressed, "I am in no doubt whatsoever that this has had a significant impact on the students who have worked with Sheila."

Rachael Dean, the account executive at Mercury who nominated Sheila after working closely with her in recent months was inspired by the true difference Sheila was making to young people in East Yorkshire. Dean said, “it always moves me when I see the life-changing results of Sheila’s work. As a recent graduate myself, I know how detrimental the effects of exam-related anxiety can be and it’s really inspiring to see how Sheila can help shape someone’s future who, in their mind, might have already lost all hope.”